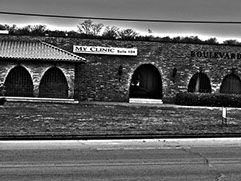 In 1995 the county Department of Health Administrators of Barry, McDonald, and Newton Counties ( Pat Tichenor, Jerrie Wise, and Mary Ann Bradley) concerned about diminishing state funding for health programs began to collaborate on grant projects that would address their counties’ health concerns. Out of these discussions, George Thomas from the Bureau of Primary Health Care, a department of what was then called Missouri Department of Health, guided the administrators to form a consortium to write a grant proposal from the Primary Health Care Resources (PRIMO). The grant was designed to provide health care for all residents of these counties regardless of income, ethnicity, and inadequate or lack of health insurance.

That grant and a subsequent grant led to applying to the Bureau of Primary Health Care for Federally Qualified Health Center status. The first executive Director was hired and the office moved to a house in Pineville that served as both the clinic and administrative offices. The clinic functioned as an FQHC Look-Alike until full status was achieved in 1999 when the consortium, Ozark Tri-County Health Care, would have access to a 330 federal grant allowing them to provide sliding fee discounts to qualifying patients . The following year, the clinic moved to a storefront in downtown Anderson with the administrative offices moving just down the same street in another building.

Ozark Tri-County Health Care expanded to provide a medical primary care clinic in Cassville in 2002. It was named in honor of Dr. James D. Warn who served not only in Cassville, but throughout the small communities in southwest Missouri.

In 2002 a dental expansion grant was received and Ozark Dental became a reality in rented facilities in Anderson. Later, a federal grant through the efforts of Missouri Senator Kit Bond and Missouri’s Seventh District Representative Roy Blunt allowed construction of a new facility combining the medical and dental facilities which was named in honor of the 40+ years of Mary Ann Bradley’s service to the residents of McDonald County, The Mary Ann Bradley Medical/Dental clinic, a 6,900 square foot facility, opened in Anderson in a more accessible location in 2004.

Ozark Tri-County Health Care expanded into Joplin in 2004 in rented facilities at 2700 McClelland near both St. John’s and Freeman hospitals and began operating My Clinic, a primary health care facility. The following year, My Dental Clinic opened in other rented space at the same complex.

In 2008, in order to better reflect the geographic and service scope of the health center, the Board of Directors approved changing the name of the organization to ACCESS Family Care. The dream of the board and staff of ACCESS Family Care is to expand dental into Barry and Lawrence Counties.

Ozark Tri-County Health Care consortium purchased a 42,000 square foot building in February 2008 near the intersection of 5th street and Maiden Lane in Joplin to be converted into a Medical and Dental Facility. The renovation began in April 2008 and was completed and moved into in November of 2008. Pediatrics moved to the new location February 2009.

With a HRSA CIP grant and other ARRA funding and donated land, plans were drawn for a new Cassville clinic that would create a new 8,000 square foot health center for three medical providers, and provide new dental services. Expected completion will be during the summer of 2011.

In March 2012 staff moved into a new Cassville clinic. With a HRSA CIP grant and other ARRA funding and donated land, the Cassville clinic became a new 8,000 square foot health center for three medical providers, and two dentists and two dental hygienists as well as other additional new dental services. The completion was celebrated.

Also in March 2012, ACCESS opened a single medical provider clinic in Neosho in retired doctor's office that was purchased and renovated.

In the fall of 2012, ACCESS Family Care began the process to become a Patient Centered Health Home and completed the process with all clinic sites January 2013.

In November 2013, ACCESS received notification of a HRSA 330 grant to add a New Access Point in Lawrence County.

ACCESS Family Care opened its doors to our newest Facility in Mt. Vernon MO., in February 2014.

In August of 2015, a grant was awarded to ACCESS Family Care Medical and Dental Clinics to establish a Medical Clinic, in Barton County, Missouri.  The Board of Directors purchased property at 210 W. 10th Street, in Lamar, in September of 2015.

On October 1, 2016, ACCESS Family Care Medical & Dental Clinics merged with Area Community Health Emissaries (ACHE) Dental Clinics.  This brought three additional Dental Clinics, to the Mission.  The ACHE Dental Clinics were located in Nevada, Carthage, and Neosho.  They now operate under the ACCESS Family Care name.  This was a major stride in our goal to make Dental Care accessible and affordable to the people of Vernon, Barton, Jasper, Newton, McDonald, Barry, and Lawrence Counties, in southwest Missouri.

How we can help?

As a Federally Qualified Health Center, we serve all people, but with a focus on the undeserved in our region.  We accept most private insurance, Medicaid, Medicare, and self pay patients.

We're here for you

From minor colds and allergies, to chronic diabetes and pregnancies; we are here to serve you and your family.  From infants to elderly, we are striving to be your healthcare and dental choice, in extreme southwest Missouri!